Developing new original creative projects to the point where they are more likely to succeed than fail is difficult. However, it is made even more difficult by the prevailing development culture as encapsulated in four often-used phrases.

These four statements are heard daily in creative companies and the wider community and profoundly limit our creative outputs, talent development and company successes.

The four phrases are :-

1. “Nobody knows anything” was written by the screenwriter William Goldman, when describing the lives of studio executives in the L.A. in the early 1980’s in his famous book ‘Adventures in the Screentrade’ p 39. He later stated he wanted this saying on his tombstone, and explained he meant studio executives do not know if they have a hit on their hands or not.

Unfortunately, this saying soon became a touchstone for the majority of development executives, producers, distributors and some screenwriters to excuse their ignorance of narrative structures, genre, tone, dramatic structure and all the other elements, which contribute to successful narratives. Hiding behind this wall of ignorance has become so normal it has been seen as a characterisation of the creative industries as a whole by some investors.

“When it comes to creative inspiration, job titles and hierarchy are meaningless.”  Ed Catmull

2.  “ The Cream always rises to the top” – an English proverb, often used to describe the expectation that the best people will always rise to the top of professions. The reality of the creative industries is that nepotism dominates the older established industry players. Within film, television, theatre, and publishing, dynasties going back often three generations or more, dominate the top of the professions. Some of these people are obviously good at their job, but the limited opportunities for others to join them means other good, and better, people are often excluded.

In addition, this notion of cream rising to the top is also used to excuse poor teaching and/or lack of training facilities, After all why spend time and money on training and education if the best people will always come to the top anyway?

3. This latter argument is also used in the context of “Talent always wins out”. The reality is radically different as demonstrated by the women protesting about their exclusion from the film industry at the Cannes Film Festival, and the on-going struggle of women in the tech and games industries in the US. Discrimination of all types is present across all societies and the creative industries are not immune, as people from minority communities attest, a point illustrated by the on-going campaign in the UK for representation in the media. 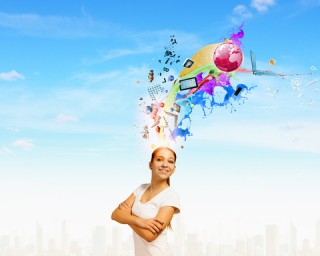 As if these two factors, discrimination on gender and minority lines, were not enough to undermine any simple vision of talent always winning through, regionalism, and the historical metropolitan concentration of creative industries, also plays a major part in undermining the talent base of all societies. Anyone living and working away from the major cities will know how hard it is to achieve recognition. The result is mass migration of talent to the cities, which compounds the belief that the talent is in the cities. A view, which completely ignores the pool of talent, which cannot move for economic or personal reasons.

4. “There is only room for the few” – the hierarchical nature of how the creative industries is portrayed with its ‘stars’, ‘moguls’, impresarios and directors all chasing awards, and sales, can easily lead to the belief that there can only be a few who will make it to the top. This scenario historically reflects a reality, where some creative professions have, for decades, been dominated by a very few individuals or families … back to nepotism. The antidote to this has been the creation of ‘fringe’, alternative’, ‘experimental’ and ‘punk’ creative activities – often dominated by those with private incomes, or access to patronage. The only other alternative being a lifetime of ‘amateur’ creation.

“Every artist was first an amateur.” Ralph Waldo Emerson

Four phrases which are commonly used, and mask the reality of a poor development culture and wide spread discrimination within the creative industries. Four phrases we need to abandon if we are not to continue limiting our creativity.

Today things are changing with web distribution and access to global communities providing opportunities to reach audiences without the gatekeepers of old. The emergence of the Apps market with its small team games successes; e-publishing with its episodic sales and community building; and vlogs where new voices emerge for younger audiences, all point to new possibilities for talent and creative opportunities.

However, for talent to flourish in this new environment it needs development support, digitally based training and thinking, and investment in micro companies, not the old creative empires.

Not the world of the old four phrases masking bad practice, but a new development culture with a focus on supporting talent where ever it is, aiming for better quality outcomes no matter the people involved, and better development across all digital platforms.

This entry was posted in Art of development. Bookmark the permalink.