Will Covid and the new mass use of digital networks change content distribution for UK creatives.? Traditionally, distribution systems were dominated by the few big players in the creative industries. From major integrated studio networks in film, television and music to international publishing houses, and major games consoles these corporate bodies have had control of distribution for creative content. In the last decade however some disruption has occurred. This has given some sectors and individuals in the creative industries an opportunity to benefit.  The question is how big is this opportunity for content creators in the age of global online distribution and e-shopping?

Is Music the Most Disrupted Sector?

In 2018 a total of 139,352 people were employed in the Music Creators’ sector in the UK. In 2019, there were 52,000 musicians in employment in the UK. In the same year, it was estimated that music creators (musicians, composers, songwriters, lyricists, singers, producers, engineers) accounted for £2.5 billion in Gross Value Added (GVA.) of the UK economy. 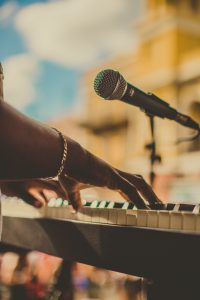 However, according to the Office for National Statistics (ONS), musicians earned on average £23,059 in 2018 – well below the national average of £29,832. For the majority this income is earnt from a combination of performance, arts admin, teaching, merchandising  and, of course, music sales.

Streaming of music now accounts for nearly half of £15.2bn global music revenues, and while independent labels have grown in the last decade in 2018 the three major record labels took almost two thirds of these global revenues.

Meanwhile, musicians  are campaigning for a major change in the payment structure of the digital streaming system. Why? A few examples have been posted as part of the #BrokenRecord campaign by artists. Violinist @tasminlittle received only £12.34p from Spotify for her 755,000 monthly listeners, while the band, Electrelane, earnt less than a fiver for their 75,000+ plays a month.  Spotify’s 2019 revenue was £6.8 billion. A similar scenario can be posted for all the major streaming platforms.

Digital ‘disruption’ may initially have cost the industry 15% of its global revenues , but it has not so far changed the control of the existing gatekeepers, and certainly has not changed the fortune of the freelance musicians who produce the content for it. However. alternatives are being posed. and #BrokenRecord is challenging the status quo, but with current Industry responses, even the Covid-19 freelance income crisis may not change this. A situation which will become even more dire if the revenue for music downloads in the UK falls as predicted from £200m in 2017 to £117m in 2022. 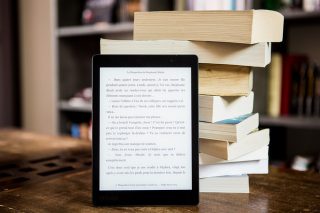 The UK publishing industry has also been negatively affected by digital disruption. The impact of Amazon on booksellers being the most obvious example. However,  has this change in distribution also affected the creators of books – the writers and illustrators?

The UK publishing industry has an annual turnover of £6bn, of which the digital income from books and journals rose by 3 per cent to £1.8bn in 2018.  The industry employs 29,000 people in the UK (though the Covid Crisis may substantially affect this), with 60% of its revenue coming from exports. Nicola Solomon, chief executive of the Society of Authors estimated that payment to authors accounted for a mere 3% of publishers’ turnover in 2016.

In 2018 ACLS reported a fall in professional writers income in real terms of 42% since 2005, and 15% since 2013. This meant the median income for writers in the UK was £10,437 p.a.  Only 13% of professional writers earnt their income solely from writing.  The rest of the writing community earnt their living, like the musicians, from a combination of lecturing, self-publishing, teaching,  PLR, grants and bursaries, plus income from ALCS, prizes and fellowships. Only 5% of writers earned over £30,000 from their writing in 2018. A recent survey revealed 57% of respondents reported that their incomes had declined since the outbreak of COVID-19, while 55%  were not expecting to benefit from UK government support measures.

In 2019  the Tech sector attracted £10.1bn of investment. However, not one of the 7 unicorns created in 2019 were focused on creative content because the majority of tech companies are in fintech, biotech, healthtech or retail, which offer little opportunity for such content. Virtual Reality(VR) and Augmented Reality(AR) are the obvious areas for content creation and exploitation in the tech sector. However, though the UK ranks 3rd for VR and in the top 5 for AR investment, these funds are being directed at healthtec, agritech and cleantech options.

The Audience of the Future investment of £12m from the government, plus the CreativeXR programme are seeking to change this.  However, the idea that VR/AR was to be a content driven consumer boom seems to have faded substantially in the last decade with little evidence of any change in the foreseeable future.

Games is the one sector still providing an area of ongoing content development, though still dominated by the big global console-makers, and it is also being affected by the Covid crisis.

The question of how can we change distribution and payment for creatives is a crucial one if the majority of the creative industries are to grow.

How can this be achieved?

As discussed in ‘5 Postive Steps to Increasing Content Development?‘ the ability of creators, and micro-companies to retain the rights to their own Intellectual Property Rights (IP) is a key starting point. This involves a new financial structure and strategic approach as discussed in ‘7 Positive Steps to Increasing Content Investment‘. In addition, it is essential to expand the focus of export strategies targetted at supporting micro-companies and freelancers.

The dominance of the major corporate players in distribution is unlikely to change in the near future. However, a  new strategy which benefits creatives financially needs to be considered, an approach which establishes a better creator-to-customer business structure, and improves support for existing initiatives e.g. bandcamp.(US):Music Glue (UK).

The biggest disadvantage micro-companies and freelancers face, compared with the corporate players in the global market place, is marketing. Therefore, any business strategy which intends to expand the growth of the creative industries needs to include a substantial targetted marketing spend. In the digital world of SEO, online Ads and digital distribution, the creation of such a marketing spend can really transform the power of creatives to reach customers.

This potential is limited by two major factors. The first is access to the finance necessary for such a marketing strategy by micro-companies and freelancers. The second is the time needed to undertake such an approach. Research has shown that creatives are stuck in a merry-go-round of commissioning and undertaking alternative employment,  just to survive. In 2017, the Creative Industries Federation recommended the creation of a digital hub designed specifically to support creative freelancers, and sole-traders. The need for this hub is even greater now.

All images from pexel